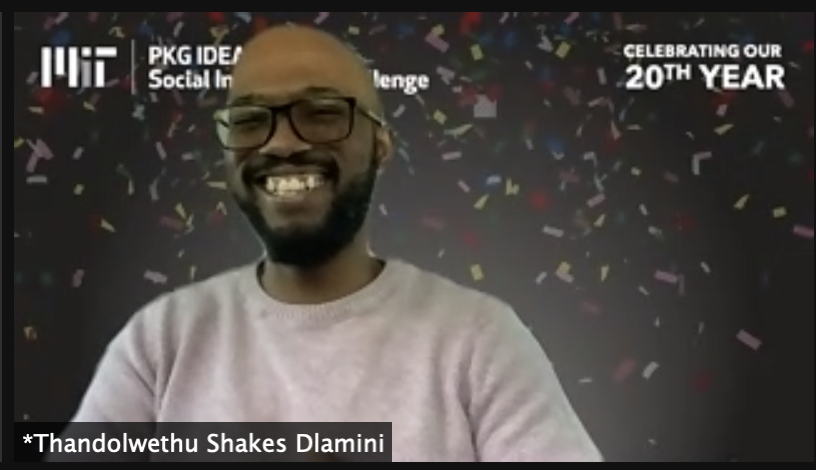 Currently, less than 7% of high school graduates in Eswatini proceed to higher education according to a 2020 UNICEF study. This troubling fact led Thandolwethu Dlamini, a graduate student in MIT’s Technology & Policy Program to found The Knowledge Institute (TKI) which earned a $20,000 grant at the 20th annual MIT IDEAS Social Innovation Awards on April 25th. TKI is developing a mobile platform to  simplify and streamline the college application process for high schoolers in Eswatini, Dlamini’s home country. Nearly 60% of Eswatini’s population lives below the poverty line and additional education could substantially improve the lives of many of the country’s young people. “This is an investment in the youth and in the future of Eswatini” said Dlamani upon receiving the award. “We are extremely grateful for IDEAS for believing in our project and helping us throughout the entire IDEAS program as we were refining everything.”

IDEAS has been influencing the social innovation ecosystem at MIT for two decades and, like many of the teams that engage in the year-long program, has evolved significantly during that period. The most notable shift, led by Rebecca Obounou, PKG Center’s Assistant Dean for Social Innovation, has been transitioning the tone of IDEAS from a “competition” to a more collaborative “challenge”.  “The challenges that society faces today require collaborative frameworks over competitive ones,” said Obounou. “We de-emphasize competition to invite more people in. We de-emphasize “winning” because it implies that there are losers. It’s a win for the PKG center when we have the opportunity to support any student along their social change pathway. As a result we see many MIT students and their teammates who would have otherwise typically identified as a social innovator or entrepreneur finally see their ability to make positive change! Our world’s challenges cannot be solved alone by the subjective ‘best’ but rather the input of as many stakeholders as possible is imperative. I learned this concept early on as a young girl who grew up in the Haitian community, where the konbit philosophy was the many in which people survived and thrived. One key tenet of the konbit culture is community and a popular saying, “With many hands, burdens are light.”

However, even early iterations of IDEAS had a monumental impact on participants. Rebeca Hwang SB ‘02, MNG ‘03, the first IDEAS grantee in 2001 gave the keynote address at this year’s awards ceremony.  “From the perspective of my life and the future career that I had after MIT IDEAS, it was a huge success because it did launch my thinking and my understanding of what it means to run successfully some of these projects that involved much more than technology,” said Hwang. “It  has also broadened my empathy and my understanding of these target markets; that I could live with, in their community, and become much more sensitized to some of the education and awareness building and culture factors that make some of these projects successful.”

Fifty percent of all IDEAS grantee projects are still active in some form and it is common for those with connections to the IDEAS program, like Rebeca Hwang, to stay in touch or remain involved with the program. Other members of the “IDEAS village” come back year after year because the work of the student teams continues to inspire. A group of these volunteers (project reviewers, judges, and mentors) received special recognition this year for their many years of service. “IDEAS is a team-based program because that reflects the reality of how real social change occurs,” said Jill Bassett, PKG Center Associate Dean and Director. “Our diverse and talented reviewers, judges, and mentors are crucial to the development of our students’ projects. The connections our students build with these individuals often persist long after the challenge cycle has wrapped up.”  Earlier this year, IDEAS launched a limited-series podcast in honor of its 20th anniversary to celebrate the many faces of the program, featuring program alumni and community partners as guests.

A group of 20 volunteer judges from around the world with a diverse set of backgrounds and expertise helped determine the allocation of four juried grant awards. Judging groups reviewed teams’ written proposals and participated in a round of virtual interviews the day before the award. The four juried grantee teams were:

Additionally, two IDEAS projects–Compass and Abrazar– received $2500 “crowd favorite” awards by earning 786 and 544 respectively of the 3702 total votes cast online for various IDEAS projects during the month preceding the awards.

As the awards event concluded, Rebecca Obounou drew upon the words of the PKG Center’s namesake and founder, MIT First Lady emeritus, Priscilla King Gray to offer encouragement to all the finalists: “As a partner [to President Paul Gray] Priscilla found three things were necessary: 1) a sense of self 2) a sense of humor, 3) a love of people.” Obounou shared. “These three items strike me as qualities that many of our social innovators might call on as they walk their paths. Your sense of self to understand your purpose, your values, and your principles, as you’ll have to call on them often as you face a varying world with unanticipated decisions and dynamics. A sense of humor to persevere when things don’t go exactly as you planned and the world is almost certainly going to serve you a lot of curveballs and you might as well build fun into the process. And a love of people to engage the most proximally impacted and underserved stakeholders with empathy, kindness and a spirit of service”